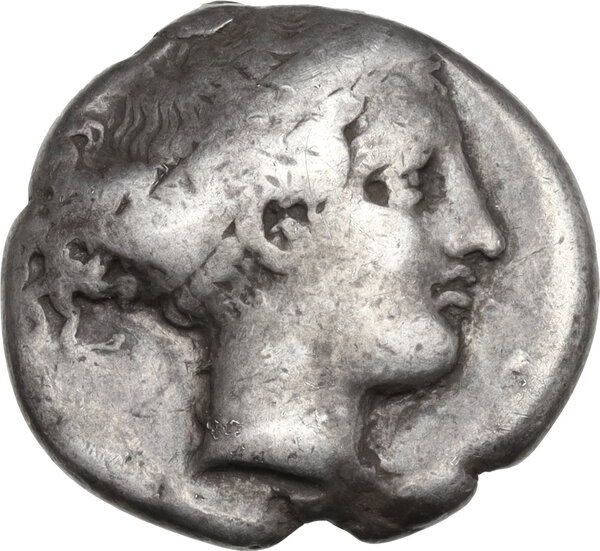 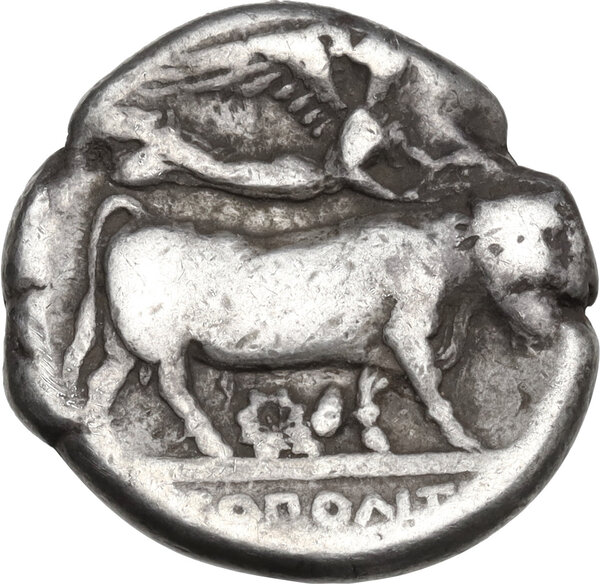 Lotto 29:
Greek Italy. Central and Southern Campania, Neapolis. AR Didrachm, c. 420-400 BC. Obv. Diademed head of nymph right. Rev. Man-headed bull walking right; above, Nike flying right, crowning him; below, wreath and pecten; in exergue, ΝΕΟΠΟΛΙΤ[ΗΣ]. HN Italy -; (cf. 552); HGC 1 -; cf. 446; SNG ANS -; (cf. 281 for obv.); Graziano 53. AR. 7.20 g. 19.00 mm. RRR. Extremely rare archaic issue. About VF. The obverse of Neapolis' Didrachms probably represents the Siren Parthenope who was the local goddess of Neapolis. The man-headed bull reverse, with and without Victory, was a type shared by a number of Campanian cities and may have generally been understood as representing Acheloös, the father of Sirens. In addition he was also the eponymous deity for the greatest and, according to tradition, the most ancient among the rivers of Greece. This river rises in Mt. Pindus and, dividing Aitolia from Akarnania, falls into the Ionian Sea. The name of Archeloös appears in cults throughout the Greek world and in mythology as the archetypal river-god and may have been used in this context in Campania.(Stack's, Tallent & Belzberg collections, 2008, lot 2004 note).
Base d'asta € 150
Prezzo attuale € 380
Offerte: 14
Lotto non in vendita