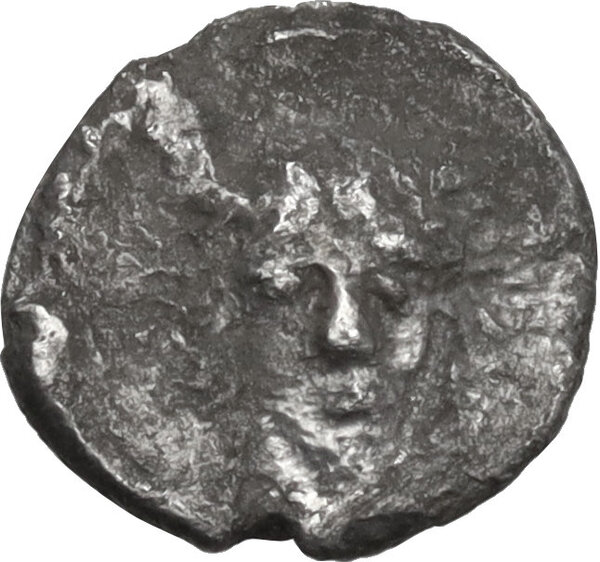 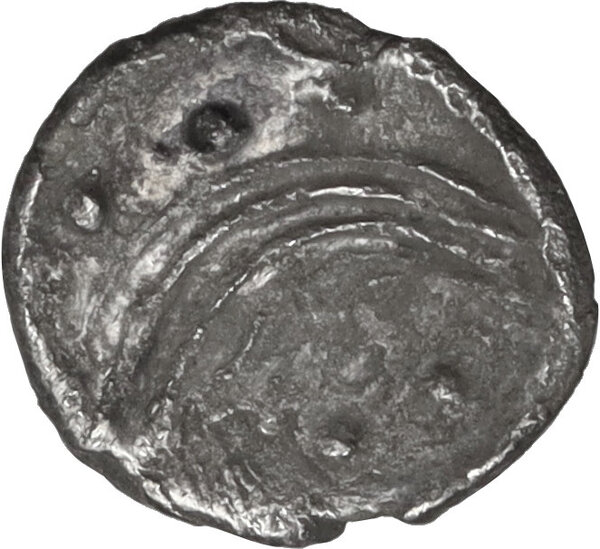 Lotto 84:
Sicily. Kamarina (?). AR Hemilitron, c. 413-410 BC. Obv. [ΣIKA]. Head of horned river-god facing. Rev. Aphlaston; six pellets [N-I-K-A around]. HGC 2 -; SNG ANS -; Campana 1; Manganaro, Travaux Le Rider, pl. 24, 36A; Manganaro, JNG 34, pl. V, 78; C. Boehringer, QT XIV (1985), pl. 1, 1; D. Salzmann, "AKIΣ – Flussgott Statt Stempelschneider" in SM 158 (May 1990), p. 36; Numismatica Ars Classica 33, lot 63. AR. 0.35 g. 9.00 mm. RRRR. Of the greatest rarity and of historical interest; unpublished in the standard references. VF/Good VF. The attribution of this piece to Kamarina is not certain. G. Manganaro first published this type in his 1984 article in JNG, where he attributed it to the Sichaninoi or Ichaninoi, who assisted Syracuse in defeating the Athenian fleet. C. Boehringer, in his 1958 QT article, assigned these to Kamarina, based on stylistic similarities in the obverse type with various tetradrachms issued by the city in the late 5th century BC (see Westermark & Jenkins 162-3). He also views the inscription not as a city ethnic, but a signature of an engraver. D. Salzmann, in SM 158, takes the view that the inscription is an ethnic, but that it should be read as AKIΣ, which was the name of a river in eastern Sicily near Mt. Etna. He places the issue at an uncertain mint near this river. While Manganaro's reasoning is a bit cumbersome, both Boehringer and Salzmann have persuasive arguments for their attributions. Nevertheless, this issue does not fit into any of the known city issues in the area of the Akis River, while, in contrast, the stylistic similarities noted by Boehringer are quite striking. (Triton XIII, 35 note).
Base d'asta € 300
Prezzo attuale € 300
Offerte: 1
Lotto non in vendita