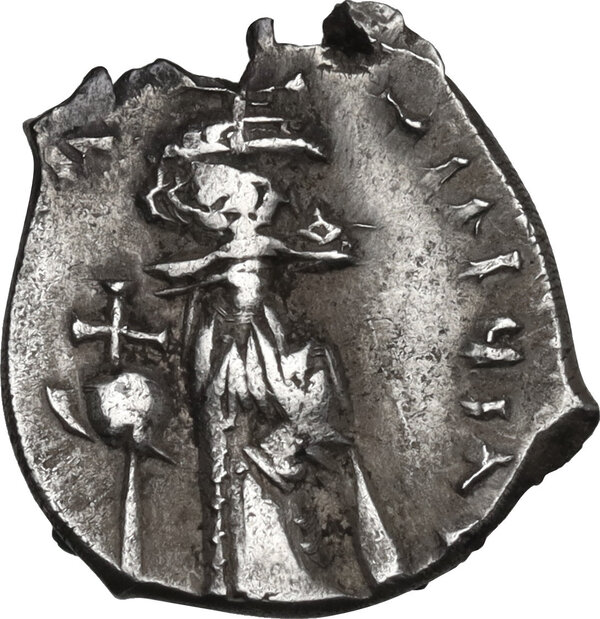 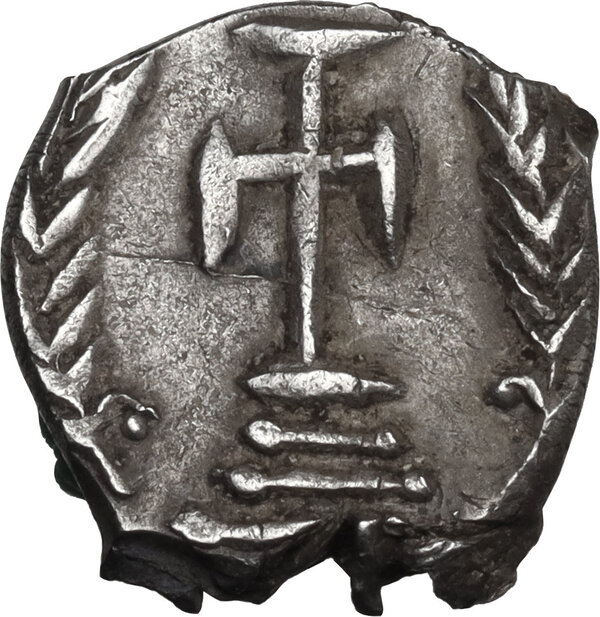 Lotto 495:
Constans II (641-668). "Ceremonial" Silver Coinage. AR Half Miliaresion or Siliqua, Constantinople mint, 652-654 AD. Obv. [d N CONSTAN]TINЧS[ PP AV] Constans, crowned and wearing chlamys, standing facing, holding globus cruciger. Rev. Cross potent on three steps; to either side, palm frond. D.O. -; MIB -; Sear -; S. Bendall. "A New Silver Ceremonial Coin of Constans II," NumCirc October 2005, p. 306. AR. 2.32 g. 15.50 mm. RRRR. Of the greatest rarity, unknown before 2005. A choice example, in excellent condition for issue, brilliant and lightly toned. Compact and ragged flan, otherwise Good VF/About EF. By the seventh century the silver miliaresion (miliarense) introduced during the reign of Constantine I had virtually vanished from the scene. Its occasional appearance as a donative led to its being described as a "ceremonial" issue, struck for coronations and other imperial celebrations, although this may not have been the sole occasion for the striking of miliaresia. Even rarer are the fractional issues; only a scattering of surviving types have been found for Phocas and Heraclius, some known only by a unique specimen. This previously unknown half miliaresion of Constans joins that limited population. The obverse type has only one parallel, in the follis of Constans dated Indictional year 11 (652/3 AD), struck at Syracuse (SB 1108), and is probably contemporary with the miliaresion issue (SB 986) with facing bust. It is uncertain if there is a specific event to be tied to these issues, and they may have simply been distributed to worthy members of the imperial court and important guests. Curiously, this standing figure seems to provide the closest design prototype for a unique miliaresion of Justinian II (SB 1257A) and the subsequent standing caliph type introduced by the Umayyad ruler al Malik at the end of the century. It should also be noted that while there is documentary evidence for the denomination "miliaresion" as used for a silver coin, the name given its fractional counterpart, the "siliqua", is a later term of convenience, not found in contemporary texts.
(Triton IX, 2006,1634 note).
Base d'asta € 1500
Prezzo attuale € 1600
Offerte: 3
Lotto non in vendita