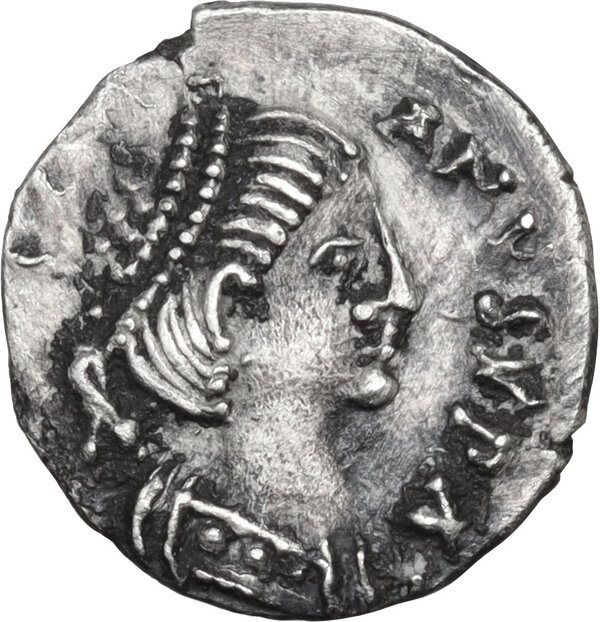 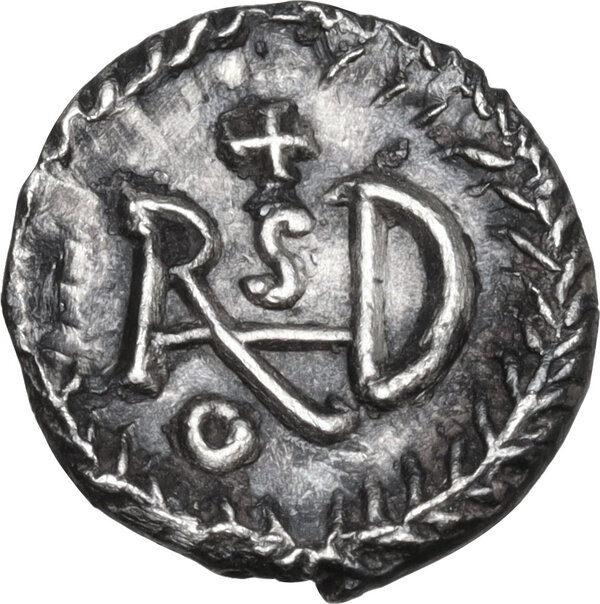 Lotto 602:
Ostrogothic Italy, Amalasuntha (534-535). AR Quarter Siliqua in the name of Justinian I, Ravenna mint (?). Obv. [ ]IV[ ]ANVSVPΛV. Pearl-diademed and cuirassed bust right. Rev. Monogram of Theoderic; cross above; all within wreath. MEC 1, 138; Kraus 3 (Hildebrand); MIB 59 (Witigis); Metlich 64 (Witigis). AR. 0.65 g. 11.00 mm. RR. Very rare and in excellent condition for issue, possibly among the finest specimen known. Prettily toned. Good VF. This restitution series with the monogram of Theoderic has already been discussed by scholars. According to Grierson, it was struck during the early period of Theodahad's reign when Amalasuntha was formally the new sovereign. On these quarter siliquae, one finds the name of Justinian on the obverse and the monogram of Amalasunta's father Theoderic on the reverse. For Grierson, only in this way could the
Ostrogoths accept her reign. Hahn and Metlich have different opinions and they prefer to ascribe this series to Witigis.
(NAC 93, 2016, 1206 note)
Amalasuntha, daughter of Theoderic, was regent (526) and queen (534) of the Ostrogoths. When her husband died, Amalasuntha was left with a son, Athalaric, and a daughter. At Theodoric’s death, in 526, Athalaric was 10 years old, and the highly educated Amalasuntha assumed the regency. Her pro-Byzantine policy, her patronage of literature and the arts, and her desire to educate her son in the Roman style were vigorously opposed by a large segment of the Ostrogoth nobility. Hence, she moved even closer to the Byzantine emperor, arranging with Justinian that if she were removed from power she would transfer herself and the whole Ostrogothic treasure to Constantinople. After successfully quelling a plot against her in 533, she put to death three Ostrogothic nobles suspected of involvement in the plot.Upon Athalaric’s death in October 534, Amalasuntha shared the throne with her cousin Theodahad, hoping to give him the title of king while retaining actual power herself. Theodahad, however, influenced by forces increasingly hostile to Amalasuntha’s policies, banished her to an island in the Tuscan lake of Bolsena, where she was strangled in her bath by relatives of the nobles killed after the plot of 533.
Base d'asta € 200
Prezzo attuale € 1155
Offerte: 15
Lotto non in vendita