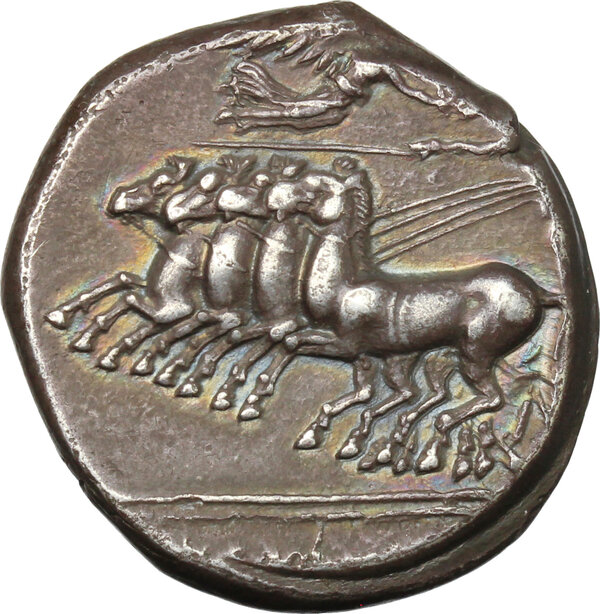 Lotto 91: Punic Sicily. Lilybaeum (as Cape of Melqart). AR Tetradrachm, c. 330-305 BC. D/ Charioteer holding kentron in right hand, reins in left, driving fast quadriga left; above, Nike flying right, crowning charioteer with wreath she holds with both hands. R/ Head of Tanit left, wearing grain ear wreath, triple-pendant earring and necklace; three dolphins around. Jenkins, Punic 55. SNG Lockett 742 (same dies). BMC 16 (same dies). AR. g. 17.05 mm. 24.50 R. Rare and superb. Delightful old cabinet tone with iridescent hues. About EF. In the last years of the 5th century BC the Carthaginians started a series of invasions of Sicily, conquering much of the western part of the Island. During their occupation, the Carthaginian struck an extensive coinage in Sicily to finance their military operations. The obverse and reverse types of the series are influenced by Sicilian prototypes, in particular the Syracuse ones, except for the later series with the head of Herakles in the obverse, which was evidently influenced by Alexander the Great.

This amazing specimen, struck at Lilybaion, was influenced by the series of Syracuse tetradrachms, which were a well-established currency assimilated to the Carthaginian culture. The chariot-racing scene displayed on the obverse is a universal type that would appeal the wealthiest poleis around the Mediterranean. The reverse, which is interpreted as Kore/ Persephone at Syracuse, would be seen by the Carthaginians as representing their primary deity, Tanit. The Goddess, always reproduced in Carthaginian coinage wearing a wreath of grain for her fertility aspects, was the North African equivalent of Astarte.
Provenance:
Ex CNG 103, 2016, lot 69.
Base d'asta € 1000
Prezzo attuale € 1050
Offerte: 2
Lotto non in vendita