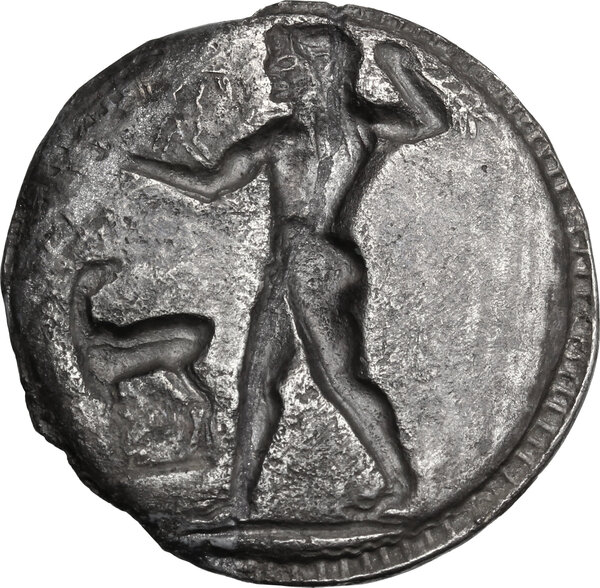 Lotto 59:
Greek Italy. Bruttium, Kaulonia. AR Stater, c. 525-500 BC. Apollo advancing right, holding branch in right hand, left arm extended, upon which a small daimon, holding branch in each hand, runs right; ΚΑVΛ to left; to right, stag standing right, head reverted. / Incuse of obverse, but daimon in outline and no ethnic. Noe Group A, 6; Gorini 3; Weber 440; Gillet 278-279; Hn Italy 2035. AR. 6.39 g. 29.00 mm. A very attractive example, prettily toned. Flaws repaired. Good VF. Kaulonia was one of a number of Achaian colonies established in Magna Graecia in the seventh century BC. It is not certain whether it was founded by new colonists from the Peloponnesos or whether it was founded by the Achaians of Kroton. Kaulonia’s coinage began in the later sixth century, and was one of the many incuse types that marked the beginning of coinage in Italy. Apollo, the patron deity of Kaulonia, and his associated iconography were the primary types featured on the coins. In the early fourth century, Kaulonia joined with Sybaris and Kroton in a league that was defeated by Dionysios I of Syracuse in 389/8 BC. Although the city was left intact, this event marked the cessation of its coinage. (Triton XIX, 2016, lot 24 note).
Base d'asta € 1000
Prezzo realizzato € 1200