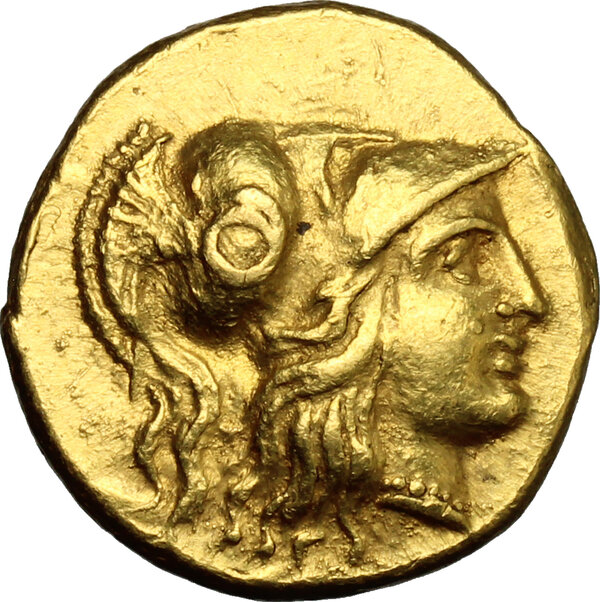 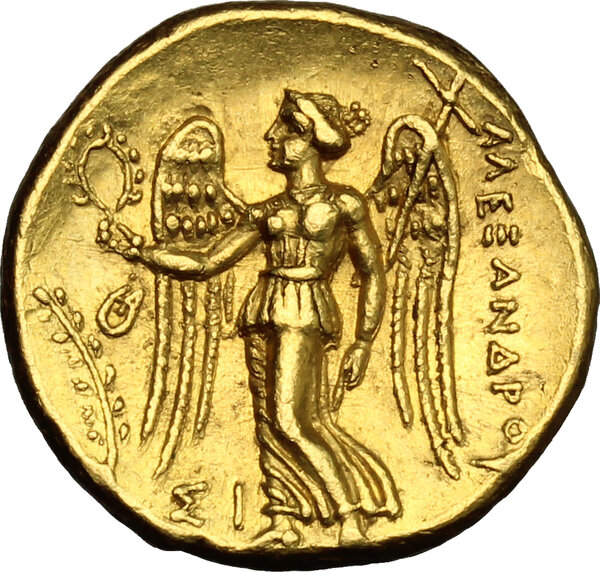 Lotto 95: Continental Greece. Kings of Macedon. Alexander III "the Great" (336-323 B.C.). AV Stater, Sidon mint, struck under Menes. D/ Head of Athena right, wearing Corinthian helmet decorated with coiled serpent and necklace. R/ ΑΛΕΞΑΝΔΡΟΥ. Nike standing left, holding wreath and stylis; palm frond and date in Phoenician to left (year 9 of Abdalonymos = 325-324 BC); below left wing, ΣΙ. Price 3486. AV. g. 8.63 mm. 18.00 A very attractive example, brilliant and superb. About EF/EF. Abdalonymos was a gardener, but of royal descent, who was made king of Sidon by Alexander the Great in 332 BC. After Alexander the Great had Sidon under siege, he gave permission to Hephaestion to bestow its crown on whom he pleased. Hephaestion offered it to two brothers with whom he lodged, but they thankfully declined it, alleging that according to their local laws, it could only be worn by one of royal blood. Being desired to point out such a person, they named Abdalonymos - the gardener, who, notwithstanding his birth, had fallen into such poverty, that he supported himself by the cultivation of a kitchen garden.
Hephaestion directed the brothers to carry the royal crown and robes to Abdalonymos. They obeyed, and found him weeding in his garden. After causing him to wash, they invested him with the ensigns of royalty, and conducted him to Alexander. This prince, who discerned in him an aspect not unworthy of his origin, turning to those around him and said 'I wish to know how he bore his poverty.'-'Would to heaven,' replied Abdalonymos, 'I may as well bear my prosperity! These hands have ministered to all my necessities; and as I possessed nothing, I wanted nothing'. Alexander was so well pleased with this reply, that he confirmed the nomination of Hephaestion, and gave the new king the palace and private estate of Strato his predecessor, and even augmented his dominions from the neighbouring country. (Roma Numismatics 17, 193, note).
Base d'asta € 1500
Prezzo attuale € 2800
Offerte: 13
Lotto non in vendita